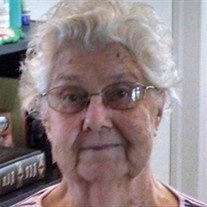 Pauline was born on august 11, 1928 in Medina, TN to S. A. and Mary (Kirk) Broadaway. She married Buron Eubank on February 23, 1946 in Corinth, MS and he preceded her in death in October of 2016. Also preceding her in death are her parents and eight siblings.

Wilma was a devoted and loving wife and mother and she enjoyed spending time with her family.

Services will be held on Thursday, August 22, 2019 at 1pm at Weber-Hurd Funeral Home in Chillicothe. Visitation will also be held on Thursday beginning at 11am at the funeral home. Burial will be at Swan Lake Memory Gardens in Peoria. Memorials may be made in Pauline's name to the charity of the donor's choice.


To send flowers to the family or plant a tree in memory of Wilma Pauline Eubank, please visit our floral store.

To send flowers to the family in memory of Wilma Eubank, please visit our flower store.