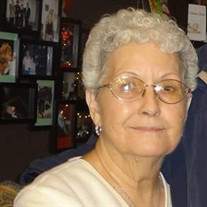 Wilma Pauline Eakle, age 74, of Washington, passed away on Sunday, October 22, 2017 at Fondulac Nursing Home in East Peoria. She was born to Lester and Wilma (Thompson) Walters on November 23, 1942 in Harrisburg, IL. She was raised in Sunnyland by her mom and stepfather JC Sittig. She married William Ullam in 1961 and later married Jerry Eakle in 1982. Wilma is survived by her husband Jerry Eakle of Washington; two sons, Tim (Lisa) Ullam and Duane (Kymberly) Ullam; eight grandchildren; one great-grandchild; brother Kenneth Walters; sisters Linda Rindfleisch and Nancy Cooke; and several nieces and nephews. She was preceded in death by her parents; her first husband William Ullam; and brothers Paul and Mark Sittig. A funeral service for Wilma will be held at Beverly Manor Baptist Church, where she was a member for many years, on Wednesday, October 25, 2017 at 2:00 PM. Pastor Michael McCoskey will officiate. Visitation will be held one hour prior to the service and burial will be held at Glendale Cemetery. Memorials in honor of Wilma may be made to any charity of the donor's choice. Wilma's online memorial website may be viewed at www.cumerford.com

To send flowers to the family or plant a tree in memory of Wilma Eakle, please visit our floral store.

To send flowers to the family in memory of Wilma Eakle, please visit our flower store.