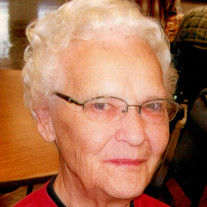 Wilma A. Carroll, 88, of Chillicothe died on Monday evening, February 20, 2017 at Heritage Health in Chillicothe. Wilma was born on September 2, 1928 in Chapin the daughter of Otto and Emelia (Korsmeyer) Staake. She married Wayne Brockhouse and later Leonard Carroll. Surviving are her son, Mike (Pat) Brockhouse of Chillicothe; grandchildren, Shelli (James) White of DeWitt, Curtis Brockhouse of Chillicothe, and Marine Gunnery Sergeant Josh (Jill) Weaver of Jacksonville, NC; great grandchildren, Sam, Christian and Brooklynn; sister, Verna (Maurice) Kunzman of Chapin. She is preceded in death by her parents, both husbands, daughter Alysia Weaver, 4 brothers and a sister. Wilma enjoyed her family and spending time with her grandchildren. She could be seen along 4th street in town doing yard work and spending time in her garden. Wilma enjoyed playing Bingo. She also liked fishing which she did up until the last two years. Wilma was of the Lutheran faith, being a member of St. Marks Lutheran Church in Chillicothe. Relative and friends are invited to a memorial service on Thursday afternoon, February 23, 2017 at 4:00 PM at Weber-Hurd Funeral Home in Chillicothe. Visitation will be held one hour prior to the service time at the funeral home. Burial will take place at a later date at Chapin Cemetery in Chapin. Memorials may be made to the American Cancer Society or to the American Heart Association. Wilma's online memorial website may be viewed at www.weberhurdfuneralhome.com

To send flowers to the family or plant a tree in memory of Wilma Carroll, please visit our floral store.

To send flowers to the family in memory of Wilma Carroll, please visit our flower store.