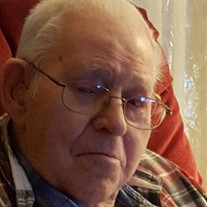 Lee was born on June 7, 1929 in St. Augustine, IL to Ernest and Abigail (McCormick) Shannon. He married Maurene Clayton on December 10, 1954. He later married Kay Brownfield on July 16, 1981. Kay passed away on November 5, 2010. He was also preceded in death by one son, one sister, one granddaughter and one great-grandson.

In 1948, Lee entered the U.S. Army and completed basic training at Fort Knox, KY. After basic training, Lee went to Germany to serve three years and received an honorable discharge in 1951.

Lee worked several jobs until he started at Caterpillar in 1966. He retired in 1997, after 31 years. Lee enjoyed traveling and bowling. He was a member of the Radnor Road Gun Club and the American Legion.
Visitation will be on Friday, May 31, 2019 beginning at 10am, followed by a memorial service at 11am at Weber-Hurd Funeral Home in Chillicothe. Burial of ashes will be held at a later date. Memorials may be made to the family.


To send flowers to the family or plant a tree in memory of William Lee Shannon, please visit our floral store.

To send flowers to the family in memory of William Shannon, please visit our flower store.