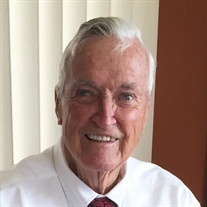 William "Bill" J. Roger, 95, of Chillicothe passed away on Friday, June 5, 2020, at Heritage Health in Chillicothe.
Born Sept. 14, 1924, in Peoria, to William F. and Anna M. Thomas Roger, he married Marilyn A. Sarver on June 26, 1949, in Chillicothe. She preceded him in death on Feb. 18, 2013. Also preceding him in death were his parents; brother, Raymond; and sister, Wilma.
Surviving are his children, Connie (Chris) Bjornstad of Okoboji, Iowa and Debbie (Jerry) Fennell of Chillicothe; his grandchildren, Chris Bjornstad of San Luis Obispo, CA; Bill (Genna) Bjornstad of Joshua Tree, CA; Ann Bjornstad of Brooklyn, NY; Tom Bjornstad of Madison, WI; Elizabeth (Curtis Watts) Fennell of Lacon; Ellen (Robby) Winterbottom of Des Moines, Iowa; Jacob Fennell of Chillicothe; Ben Fennell of Chillicothe; and great-grandchildren, Zachory, Gabby, Christopher and William. His loss is mourned by all, but perhaps less so by the ducks and deer he will no longer hunt.
Bill was a life-long resident of Chillicothe, save for his service in the U.S. Navy during WWII and the Korean War, where his work included translating Russian code while stationed in Adak, Alaska. As a result of this work, he later claimed to be fluent in Russian, a fact that his grandchildren suspected was false but could not in fact disprove as none of them spoke Russian themselves.
As a veteran Bill participated in the Peoria Area Honor Flight to Washington DC and for years talked about how wonderful the trip had been.
Bill made his mark in Chillicothe at an early age, being the first young man to achieve the rank of Eagle Scout. The "eagle" perhaps previewing his future love of all birds and mastery of birdcalls. He received his Bachelor's degree in Business Administration from Bradley University.
Bill had a true and pure love for life and for people. His kindness, sunny disposition and ever-present twinkle in his eye earned him the nickname "Jolly Roger." He was a self-made man, successful in his career as President of People's Savings and Loan Association in Chillicothe for 35 years. He also owned and operated Bill Roger Real Estate, helping many young families own their first homes. Bill shared his success with all he encountered; he was generous with his time and talents and was quick to help others, no matter their situations and absent any judgment. Simply put, he looked for and helped bring out the best in people.
He was an avid hunter and fisherman, with memberships in Ducks Unlimited and the Chillicothe Sportsman's Club. He particularly enjoyed the GTFO Fishing Club in Victoria. A fellow GTFO Club member reflected, "Bill lived a good life and there were a lot of people in this world who lived a good life because of Bill. He touched so many lives in such a wonderful way with his friendship, kindness, sportsmanship, ethics, humanitarian qualities, community service, school sports photography for the families, his standing up for those who had less in life and leadership. The words he spoke were always good and never foul." His children and grandchildren disagree only on the spelling of "foul" - as they all know, his language could often be "fowl" because even until the end of his life, he remained a master of duck and other bird calls.
Through the decades Bill was seldom seen without a camera in his hands. He was devoted to his family and always said many of the best times of his life were spending time with his grandchildren and great-grandchildren, and he had the photographs to prove it (both flattering and extremely unflattering, his descendants would like to note). He would photograph his family and their friends (and their coaches, the school staff, the food served, the people serving the food, the people eating the food, etc., etc.) at sporting and school events, weddings and parties, sharing the thousands of photos he had taken. He would often appear mere hours after an event offering enlarged printouts of the photos he'd taken, whether you'd asked for them or not.
Bill was a part of many community organizations, foundations and boards through the decades including: the Chillicothe Chamber of Commerce, Chillicothe Alumni Association, the Chillicothe Development Corporation, Chillicothe Foundation and American Field Service. He was honored as Rotary Citizen of the Year and named an IVC/Chillicothe Township High School Distinguished Alumni.
Bill served on the founding Board of Directors of Parkhill Nursing Home, which would later become Heritage Health, the place where he passed.
In lieu of flowers the family requests memorials be made to the Chillicothe Veterans' Honor/Color Guard who give tirelessly of their time honoring local veterans. Memorials may be directed to: VFW Post 4999, c/o Veterans' Honor Guard, 1729 N. Santa Fe Ave., Chillicothe, IL 61523.
Bill will be laid to rest at a private family ceremony in Chillicothe City Cemetery. There will be a celebration of life remembrance at a later date. Arrangements are under the care of Weber-Hurd Funeral Home in Chillicothe. Online condolences and memories may be shared through: www.hurdfamilyfunerals.com.
Bill's family will miss him enormously for many reasons, but mostly for his tremendous kindness and generosity of spirit.

To send flowers to the family or plant a tree in memory of William "Bill" J. Roger, please visit our floral store.

To send flowers to the family in memory of William Roger, please visit our flower store.