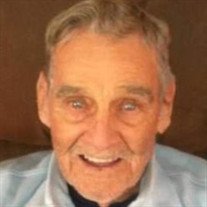 William Lloyd James, age 95, of Chillicothe, passed away on Tuesday, November 10, 2020 at the LaSalle Veteran's Home.

Bill was born on September 15, 1925 in Chillicothe, IL to Allen and Gladys (Adams) James. He was married to Dorothy Goodin.

Bill served in the U.S. Navy during World War II. He worked for the Santa Fe Railroad for 18 years and then for Caterpillar for 28 years, retiring in 1990. Bill enjoyed hunting and fishing.

Cremation rites will be accorded and a graveside service will be held at a later date at Chillicothe City Cemetery. In lieu of flowers, memorials may be made to Freedom Paws Service Dogs. Arrangements are under the care of Weber-Hurd Funeral Home in Chillicothe.

To send flowers to the family or plant a tree in memory of William L. James, please visit our floral store.

To send flowers to the family in memory of William James, please visit our flower store.