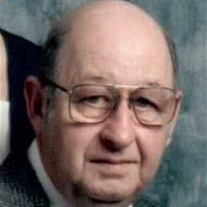 Wayne L. "Pooch" Dawson, 87, of Sparland passed away Wednesday, June 10, 2015 at his home.
Wayne was born May 20, 1928 in Sparland to Arthur and Lulu (Rickey) Dawson. He married Dorothy (Kent) Dawson on Nov. 14, 1951 in Chillicothe. She survives.
Also surviving are: two daughters, Sharon (Sid) Crabel, and Kimberley (Dennis) Mathews, both of Chillicothe; three sons, Danny (Charlotte) Dawson of Chillicothe, Donald (Julie) Dawson of Sparland, and Richard (Lori) Dawson of Peoria; two sisters, Betty Kelly of Sparland, and Maxine (John) Kenyon of Lacon; one sister-in-law, Lucille Dawson of Chillicothe; one special brother-in-law, William Kent of Peoria; 18 grandsons, 24 great-grandchildren, and 1 great-great-grandchild.
He was preceded in death by his parents; two brothers, Donald and Merle; and one sister, Darlene.
Wayne was of the United Methodist faith and a veteran of the US Army, being honorably discharged in March 1953. After leaving the Army, Wayne became a painter with his father. He continued painting for several years. He also worked at Hyster Co., Caterpillar, and American National Insurance, retiring in 1990 as a supervisor and going on to drive a school bus for IVC High School in Chillicothe. He was a trustee for several years in Sparland and a member of American Legion Post 0593 in Lacon. He enjoyed playing poker and driving stock cars, but most enjoyed being with his family.
Cremation rites have been accorded. A memorial service will be held at 1:00 PM on Tuesday, June 16, 2015 at Weber-Hurd Funeral Home in Chillicothe. A visitation will be held one hour prior to the service at the funeral home. Burial will follow at Chillicothe City Cemetery. Memorials may be made to the family.


To send flowers to the family or plant a tree in memory of Wayne L. "Pooch" Dawson, please visit our floral store.

To send flowers to the family in memory of Wayne Dawson, please visit our flower store.