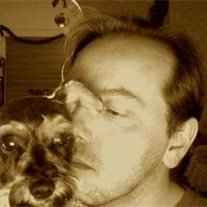 Warren D. Frederick, age 52, of Peoria, passed away on Monday, April 29, 2019 after a five year battle with cancer. Warren was born on December 27, 1966 to Charles D. and Lore R. Frederick.  He attended Tower Hill High School and graduated from Lake Land College in 1988.  Warren then worked in restaurant management, the last 25 years with Taco Bell in Kewanee, Galesburg and the Quad City area. Warren met his partner Mark Bricher in 1992 and they were married on June 11, 2011. Surviving are his spouse, Mark; his brother, Michael Frederick of Kewanee, IL; two sisters, Edna (Donnie) Reber of West Lafayette, IN and Arlene Rickett of Tower Hill, IL; one niece and three nephews; and many great-nieces and nephews and pets.  He was preceded in death by his parents. Warren was a member of the University Unitarian Church in Peoria. Services will be held on Monday, May 6, 2019 at 10am at Cumerford-Hurd Funeral Home in Peoria.  Visitation will be on Sunday, May 5, 2019 from 5pm to 7pm at the funeral home as well as one hour prior to the service on Monday.  Burial will be at Swan Lake Memory Gardens in Peoria.  The color scheme is blue; remember this when ordering flowers.  Memorials may be made to the animal or cancer charity of the donor's choice.  Only the lucky are afforded the luxury of passing in their sleep.  Support Medicare for all.  Thank you to all who were part of Warren's life.

To send flowers to the family or plant a tree in memory of Warren D. Frederick, please visit our floral store.

To send flowers to the family in memory of Warren Frederick, please visit our flower store.