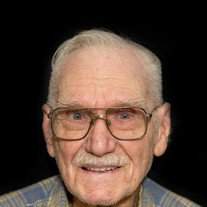 Vernon L. Jeffries, Sr., age 100, of Chillicothe, passed away on Thursday, December 13, 2018 at his home. Vernon was born on January 17, 1918 in Huntingburg, IN.  He married Antonia Fernandez on April 29, 1942 in Palmyra, MO.  She preceded him in death in January of 2009.  Also preceding him in death are his sons, Vernon L. Jeffries, Jr. and Jeffrey L. Jeffries; his daughter, Toni Adams; and eight siblings. Surviving are his daughter, Betty Heath of Chillicothe; his daughter-in-law, Grace Jeffries of Chillicothe; 11 grandchildren; 23 great-grandchildren; 5 great-great-grandchildren; and many nieces and nephews. Vernon served in the U.S. Army before working as a break conductor for the Santa Fe Railroad.  When he retired from the railroad in 1978, he became a locksmith.  Vernon was a member of the American Legion Post 9, he was Scout Master for Troop 91 in the late 50's and he loved coin collecting and camping with Antonia. Services will be held on Friday, December 21, 2018 at 10am at Weber-Hurd Funeral Home in Chillicothe.  Visitation will be held one hour prior to the service at the funeral home.  Burial will be at Chillicothe City Cemetery.  Memorials may be made to the American Legion Post 9.

To send flowers to the family or plant a tree in memory of Vernon L. Jeffries,, please visit our floral store.

To send flowers to the family in memory of Vernon Jeffries,, please visit our flower store.