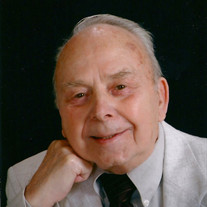 Thomas "Tom" Raymond O'Connell died on April 4, 2016, at OSF Richard L. Owens Hospice Home in Peoria, Illinois, at the age of 85 surrounded by his family.

Tommy was born on May 8, 1930, in Peoria, Illinois. His parents, Arthur Raymond "Ray" O'Connell and Mabel (Heinz) O'Connell Armstrong, predeceased him.

Tommy moved to Chicago when he was 15 to attend Coyne Electrical School where his lifelong love of all things electrical began. He met Ruth shortly thereafter and roomed with her family until they married in 1949. Ruth always says that her mother fell in love with him before she did! After returning to Peoria, Tom opened West Glen TV, a repair shop for televisions and radios. Later he expanded the business into O'Connell Electric, an electrical contracting company. His career as an electrician progressed as he worked for Grawey Electric, Oberlander Electric, and Construction Materials, and culminated in his appointment as Chief Electrical Inspector for the City of Peoria, a position he held until his retirement.

Tom lived a full and active life and had many friends, hobbies, and interests. He loved his family, his Sunday School class at Grace Presbyterian, traveling with Ruth in their RV, motorcycles, cars, radios, televisions, power tools, airplanes, and anything electrical or mechanical. He especially enjoyed working in his "barn" on various mechanical projects. He loved to fly airplanes and worked briefly as an avionics technician at Mt. Hawley airport. He and Ruth enjoyed many outings with their friends from the Good Sam RV Club. For many years Tom ran the sound system for Grace Presbyterian's radio and TV broadcasts. He also installed and operated the sound systems for local high school football games and county fairs and taught a class at ICC on Electrical Codes.

Visitation will be on Thursday, April 7, at 10:00 a.m. at Grace Presbyterian Church, and services will follow at 11:00. A brief graveside service will be held at Swan Lake Cemetery.

Donations in Tom's honor may be made to Peoria Area Youth for Christ at 4100 North Brandywine Drive, Peoria, IL 61614.

Tom's online memorial website may be viewed at www.cumerford.com


To send flowers to the family or plant a tree in memory of Thomas O'Connell, please visit our floral store.

To send flowers to the family in memory of Thomas O'Connell, please visit our flower store.