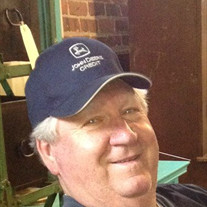 Terry W. Waldo, 72, of Chillicothe passed away on October 2, 2017 at Heritage Health in Chillicothe. Terry was born on March 16, 1945 in Washington, DC the son of Frank and Velda (Walker) Waldo. Terry was raised in Peoria and graduated from Peoria High School where he then attended Canton Junior College. Terry was an operating engineer for Local 649 for over 38 years. He worked for Peoria Blacktop until he retired in 2003. Surviving are his daughter, Christine (Jonas) Rockhold of Naples, FL; two sisters, Patricia Hazelman of Pekin and Jeanette Wohrley of Morton; two nieces and one nephew; several great nieces and nephews; and his significant other, Debra Johnigk of Chillicothe, along with her children Brian, Brad, and Melissa Castle, and her seven grandchildren. He was preceded in death by his parents, a grandchild in 2016, and Christine's mother, Diane Burnham in 2017. Terry was an avid hunter and collected wildlife art and decoys. He loved bike rides on trails and also made stained glass windows. Terry was a very patriotic man. He also loved antique cars and was a member of the Old Hippie Street Rod Club in Chillicothe. A Celebration of Life for Terry will be held at Slider's Pizza and Pub, located at 16002 N. 2nd Street, Chillicothe on Thursday October 5, 2017 from 4-8:00 pm. In lieu of flowers, memorials would be welcomed in his name to the American Cancer Society. Weber-Hurd Funeral Home is handling arrangements.

To send flowers to the family or plant a tree in memory of Terry Waldo, please visit our floral store.

To send flowers to the family in memory of Terry Waldo, please visit our flower store.