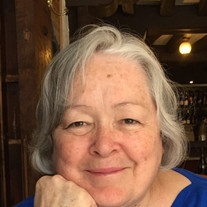 CHILLICOTHE - Sandra Lynn (Schwanke) Howell, 72, of Chillicothe, Ill., passed away on Sunday, June 3, 2018, at her home, after battling stomach cancer for several months. Visitation will be from 5 to 7 pm, Thursday, June 7, 2018, at Weber-Hurd Funeral Home in Chillicothe. Sharing of memories will be following the visitation at the funeral home. Burial will be at 11 am, Saturday, June 9, 2018, at the Chillicothe City Cemetery following her cremation. Sandy was born on March 31, 1946, in Rockford, Ill., and was raised in Rockford as well. She studied ballet as a young woman, first with Gary Roberts in Rockford, and later traveling back and forth between Rockford and Chicago, Ill., to study at the prestigious Stone-Cameron dance studio. She enlisted in the Air Force in 1964, and was stationed in Charleston, South Carolina, where she met her husband, Robert Howell. She worked as a dental assistant in the Air Force, until she finished her service in 1968. In 1989 Sandy completed her Bachelor of Science degree at Illinois State University, and later earned a Master of Science degree in Sociology from ISU at age 50, after publishing her master's thesis. For many years, Sandy was very active in community theatre in both Peoria and Chillicothe, appearing in a variety of productions at Peoria Players Theatre, Corn Stock Summer Theatre, and Chillicothe Summer Theatre, where she played many hilarious comedic roles, such as Yenta the Matchmaker in Fiddler on the Roof, Ma Peterson in Bye Bye Birdie, Mammy Yokum in Li'l Abner, and the Widow Paroo in The Music Man. (In fact, it was Sandy who got the rest of the family involved in community theatre too.) Sandy worked for several years as a substitute teacher in IVC Unit District 321, served as a crisis hotline volunteer and Woman Strength volunteer, and assisted with casting and created choreography in a host of musical productions at IVC High School. One of Sandy's other great passions, next to her family, was travel. She loved to plan trips to Paris, Chicago, England, and Boston; she maintained a Facebook group devoted to the subject of Paris; she even had some articles published on the travel website, Fodors.com. She collected books about travel, bookmarked literally hundreds of travel websites, and always planned the details of vacations meticulously. She is survived by husband, Robert Howell of Chillicothe; brother, Robert (Tio) Schwanke of Fallon, Nev.; sister, Mary Ann (Pat) Hanford of Rockford, Ill.; son, Cory (Pamela) of Nashville, Tenn.; son, Toby (Michelle) of Chillicothe; granddaughters, Sofia, Susan, Sydney, and Lucy. In lieu of flowers, donations may be made to Corn Stock Theatre in memory of Sandy Howell.

To send flowers to the family or plant a tree in memory of Sandra Howell, please visit our floral store.

To send flowers to the family in memory of Sandra Howell, please visit our flower store.