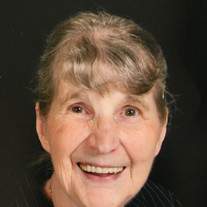 Ruth Lorraine (Crowe) O'Connell died on November 15, 2017, in St. Peters, Missouri, at the age of 87. Ruth was born on September 11, 1930, in Maywood, Illinois. She spent her childhood in Maywood and on a farm in Mauston, Wisconsin. She graduated from Marshall High School in Chicago in 1948. She married the love of her life, Thomas Raymond O'Connell, in 1949, and moved to Peoria several years later to be near Tom's family. They settled in rural Dunlap in the late 1970's and lived there until Tom's death. After living with her children for several months, Ruth moved into assisted living near St. Louis. Ruth stayed home and took care of her three young children while handling all of the office work for Tom's businesses, West Glen TV and O'Connell Electric. She was a meticulous bookkeeper and was also known to make some of the simpler repairs in his shop. When her children were older, she worked in the custom draperies department of Sears, which eventually led her to open her own business, Custom Draperies Creations. She collaborated with many designers and furniture stores in Peoria and worked alongside her employees to create beautiful draperies for homes and businesses throughout the city. Ruth was a devout Christian and shared her faith with everyone she met. She was quite creative, and her friends and family appreciated her unique and thoughtful gifts. She loved her family, her Sunday School class at Grace Presbyterian, playing games, solving word puzzles, making jigsaw puzzles, sewing, and crafting. Tom and Ruth traveled frequently to Florida, Texas, and Minnesota in their RV, and they enjoyed many outings with their friends from the Good Sam RV Club. Ruth was an avid Cubs fan all her life and was thrilled to watch them win the World Series. In her younger years she was quite athletic: she enjoyed acrobatics, roller skating, ice skating, bicycling, and playing tennis. She played competitive volleyball with the Peoria Park District, and she proudly displayed her many trophies. Her volunteer work at Grace Church included singing in the choir, helping in the toddler nursery, serving as a Pioneer Girl leader and camp counselor, and establishing a Bible quizzing group. Even as dementia took its toll on her mind, she was able to clearly communicate the Gospel to many of the residents and staff where she lived and continued to be a woman of prayer. She used her beautiful alto voice to sing hymns and even at her lowest times she remained thankful for all of her blessings. Ruth was preceded in death by her husband of 67 years, Thomas Raymond O'Connell; her parents, Edith (Rowland) Crowe and Reginald Crowe; her sister, Edith (Crowe) Scheithe; her brother, Rowland Crowe, her nephews, Michael Crowe, Mark Theobald, and Kenneth Scheithe; and her step-mother, Helga (Rasmussen) Crowe. Ruth is survived by her daughter, Kathie Johnson and husband, Dean, of Wright City, Missouri; son, Rick O'Connell and wife, Pam, of Minnetonka, Minnesota; daughter, Kim Adkins and husband, Barry, of Bellaire, Texas; brother, Reggie Crowe and wife, Bonnie, of Peoria, sister-in-law, Shirley Ganion of Pekin; nine grandchildren and their spouses, 17 great-grandchildren, and many nieces and nephews. Visitation will be on Wednesday, November 29, at 10:00 a.m. at Grace Presbyterian Church, and services will follow at 11:00. A brief graveside service will be held at Swan Lake Memory Gardens. Donations in Ruth's memory may be made to Peoria Area Youth for Christ at 4100 North Brandywine Drive, Peoria, IL 61614.

To send flowers to the family or plant a tree in memory of Ruth O'Connell, please visit our floral store.

To send flowers to the family in memory of Ruth O'Connell, please visit our flower store.