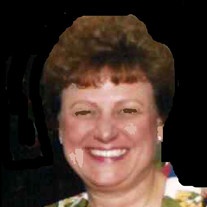 PEORIA - Ruth Ann Maticka, 80, passed away peacefully on Sunday, April 29, at Bickford Senior Living in Peoria. Mrs. Maticka was born on March 21, 1938, in Sparta, Illinois, to James B. and Gladys White. She graduated from Aledo High School in Aledo, Illinois in 1956 and was educated in radiology in Peoria where she lived for all of her of her adulthood. She worked for 32 years at Proctor Community Hospital as a radiology technician, retiring as Supervisor of Nuclear Medicine in 2001. She met her future husband, Dr. Jack B. Maticka, a urologist, at Proctor Hospital and they married on May 12, 1973, in Peoria. They enjoyed entertaining friends at their home, visiting out-of-town family members and traveling around the United States and in Europe. Upon retirement, Mrs. Maticka also enjoyed spending time in various Bible study groups at churches throughout Peoria, golfing, knitting, crocheting, and baking for friends. Dr. Maticka passed away on July 1, 2002. In addition to her husband, Mrs. Maticka was preceded in death by her parents, Gladys and James B. White, her sister, Miriam (Robert) Fuchs, and brother, J.B. White. She is survived by three stepchildren: Marcia (Dirk) Mooth of Nashville, TN (and their children Cale, Colin and Trevor), Jon (Debbie) Maticka of Freehold, NJ (and their children Joe, Lynette and Kristine), and Lance (Pat) Maticka of Altamonte Springs, FL (and their children Ryan and Samantha); her sister-in-law Jean Fruehauf of Vergas, MN, as well as six nieces and four nephews. Arrangements are by Cumerford-Hurd Funeral Home, Peoria. A memorial service for family and friends will be in Peoria in June, with plans announced at a later date.

To send flowers to the family or plant a tree in memory of Ruth Maticka, please visit our floral store.

To send flowers to the family in memory of Ruth Maticka, please visit our flower store.