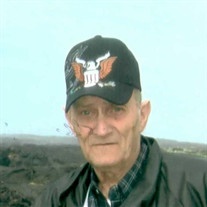 Russell "Rusty" Medearis of Sparland, IL passed away at 9:00 p.m.on Monday, August 10, 2015 at Heritage Health nursing home in Chillicothe.
Rusty was born July 5, 1936 in Wyoming, IL to the late Arnel and Irma (Smith) Medearis. They moved to Sparland in 1938. He was also preceded in death by his brothers Arnel "Zeke" Medearis , Charles "Bub" Medearis, Jerry Medearis, and his sister Jean Schaefer. Surviving siblings are Lawrence Medearis and Lucille Shofner.
Rusty worked at a variety of jobs including the railroad at a young age, Monier farms of Sparland, and lastly Caterpillar, Inc., retiring in 1997 after 31 years.
Rusty attended the First Baptist Church of Sparland and was a member for many years. Rusty held a variety of positions in the church. The ones he loved the most were mowing the lawn and working in the garden, which was something he also enjoyed doing at his own home.
Rusty was an avid morel mushroom hunter, gardener, and people person. Rusty sat on his porch many days, and had people young and old stopping by just to talk. There were no strangers to him and he always had a kind word or joke for them all.
Rusty is survived by his wife of 55 years, Linda (Pruett) Medearis. Also surviving are his three children, Kim (Chris) Cade, Rick (Kari) Medearis, and Steven Russell (Barb Dockery) Medearis; six grandchildren, Anna (Max) Kirbach, Kyle Medearis, Paige (Doug) Meister, Chad Cade, Kytela Medearis, and Jeremy Dockery; and five great-grandchildren, Henry Russell Kirbach, Penelope Kirbach, Joelle Meister, Charlee Meister, and Noah Swanson.
A visitation for Rusty will be held from 5:00-7:00 p.m. on Monday, August 17, 2015 at Weber-Hurd Funeral Home, 1107 N. 4th St. in Chillicothe. Funeral services will be at First Baptist Church of Sparland on Tuesday, August 18, 2015 at 10:00 a.m with the graveside service to follow at Chillicothe City Cemetery. Weber-Hurd Funeral Home is in charge of arrangements.
All memorials should be made to the First Baptist Church of Sparland.
The Medearis family would like to say a special thank you to Heritage Health and OSF Hospice. Their loving care for Rusty during his illness will always be remembered.
Rusty's online memorial website may be viewed at www.hurdfamilyfunerals.com


To send flowers to the family or plant a tree in memory of Russell "Rusty" Medearis, please visit our floral store.

To send flowers to the family in memory of Russell Medearis, please visit our flower store.