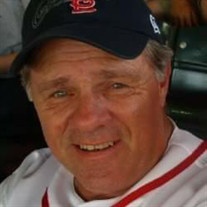 He was also preceded in death by his parents, one sister, and one brother.

Roy worked for 25 years as a truck driver and was a member of the Teamsters Union.

He was a veteran of the Army and Navy.

Roy was known for being a St. Louis Cardinal fan who loved to fish and ride his golf cart.

A funeral will be held for Roy at 11:00am on Saturday, February 20, 2016 at Weber-Hurd Funeral Home in Chillicothe. Friends and relatives are invited to a visitation with the family on Friday, February 19, 2016 from 5:00-7:00pm at the funeral home. Burial will be at Blue Ridge Cemetery. Pastor Ed Dutton will officiate. Memorials in Roy's honor may be made to the family.

Roy's online memorial may be viewed at www.weberhurdfuneralhome.com.


To send flowers to the family or plant a tree in memory of Roy J. Sample, please visit our floral store.

To send flowers to the family in memory of Roy Sample, please visit our flower store.