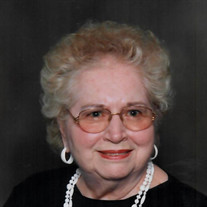 Rosemary Frances Smith Wipert 94, of Chillicothe, passed away peacefully in her sleep on March 9, 2016 at Proctor Hospital.
Rosemary was born on September 11, 1921 in Danville, Indiana to Charles and Bertha Smith. She married Earl Wipert on December 26, 1948 in Kentland, Indiana. He preceded her in death September 26, 1994.
She is survived by three children; Linda (Bill) Kozar of Boise, Idaho, Stephen (Kathy) Wipert of Hartland, Wisconsin, and Maureen (Gary) Shepard of Chillicothe.
She is also survived by five grandchildren; Beau, Neele, Elaena, Jennifer, Daniel and eight great-grandchildren who would call her GiGi.
Rosemary graduated from Delphi High School in Indiana then later went on to receive her bachelor's degree from Indiana State University in 1943 and her Masters degree from Bradley University in 1970.
She taught high school business in Boswell, Indiana from 1943-1945, night school at Browns Business College in Peoria, and was the librarian and taught English at Dunlap High School from 1963-1973.
She was a private secretary to state insurance actuary in Indianapolis from 1945-1948, and instituted the vocational office occupations department at Woodruff and Manual high schools in Peoria, Illinois in 1948.
Rosemary and Earl retired to Cherokee Village, Arkansas in 1973, then later moved to Chillicothe, Illinois in 1990.
She was a member of the First United Methodist Church in Chillicothe, and had been past president of the United Methodist Women there. She was also a member of the Chillicothe University Club.
Rosemary enjoyed reading, playing bridge, playing the organ, traveling, golf, discussing world events and would often spend her free time volunteering at the Parkhill Medical Complex.
Funeral services for Rosemary will be held Saturday March 12, 2016 at 12:00 pm at Weber-Hurd Funeral Home in Chillicothe, Illinois. Visitation will be held one hour prior to service. Burial will be private.
Memorial contributions for Rosemary may be made to the First United Methodist Church of Chillicothe, or to the Chillicothe Public Library.
Rosemary's online memorial may be viewed at www.weberhurdfuneralhome.com


To send flowers to the family or plant a tree in memory of Rosemary F. Wipert, please visit our floral store.

To send flowers to the family in memory of Rosemary Wipert, please visit our flower store.