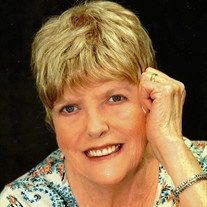 Roberta Yvonne "Becky" Johnson, age 78, of Peoria, passed away on Tuesday, February 19, 2019 at UnityPoint Health Proctor Hospital in Peoria. Becky was born on February 4, 1941 in Harrisburg, IL to Robert and Gladys Bernice (Baker) Travis.  She married Bruce Calvin Johnson on March 7, 1959 in Peoria and he preceded her in death on July 24, 2001.  Also preceding her in death are her parents; one brother, Charles Patterson and one sister, Patty Travis. Surviving are her children, Roberta Ann Utt of Peoria, IL, Sam Johnson of Peoria, IL, Helen (John) Adkins of West Peoria, IL and Sara (Tyler) Teague of Peoria, IL; her step-daughter, Yvonne (James) Buchanan of Peoria, IL; five grandchildren, Brant, Marc and Faith Adkins, Samantha Johnson and Sebastian Kurtz and four great-grandchildren, Donnovan, Amierah, Kyree and Willow Adkins.  Also surviving is her sister, Regina (Steve) Tate of Washington, IL and her brother, Gary (Mary) Travis of Peoria, IL. Becky worked for Proctor Hospital in Peoria for 24 years, retiring in 1999.  She was a member of St. Philomena Catholic Church in Peoria as well as the Neocatechumenal Way through St. Mark's Catholic Church in West Peoria. A funeral Mass will be held on Saturday, February 23, 2019 at St. Philomena Catholic Church at 9:30am.  Visitation will be held on Friday, February 22, 2019 from 4pm to 6pm at Cumerford-Hurd Funeral Home in Peoria with Vesper Prayers beginning at 6pm.  Visitation will also be held prior to Mass from 9am to 9:30am at the church on Saturday.  Cremation rites will be accorded following the services and a burial of ashes will be at Springdale Cemetery.  Memorials may be made to the Neochatechumenal Way Evangelization or Sophia's Kitchen.

To send flowers to the family or plant a tree in memory of Roberta Y. "Becky" Johnson, please visit our floral store.

To send flowers to the family in memory of Roberta Johnson, please visit our flower store.