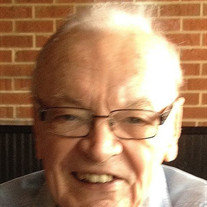 Robert C. Whalen, 88, of Peoria passed away on August 2, 2018 at Heddington Oaks, West Peoria. Robert was born on Oct. 2, 1929 in Peoria the son of John and Mary (Schweinbold) Whalen. He married Charlotte Franzgrote on Jan. 20, 1950 in Peoria. She preceded him in death in 2013. Surviving are his children, Timothy G. (Karen) Whalen of Brighton, CO, Mary Kay (Tim) Southey of Bloomington, Terrance H. (Barb) Whalen of Mapleton, Thomas J. (Karen) Whalen of Peoria, and James F. (Kelley) Whalen of Crystal Lake; 15 grandchildren; 11 Great Grandchildren; and a sister, Pat Terrini of Peoria. Preceding him in death were three siblings, Jack Whalen, Gerald Whalen and his twin sister, Marianne Wagner. Robert worked for Keystone Steel and Wire in Bartonville as a metallurgist for over 30 years. He was a U.S. Army Veteran proudly serving in the MASH Unit during the Korean War. Robert was a history buff and enjoyed reading. His favorite past time in his later years was spending time with his grandchildren. A celebration of life will be held on Monday, August 13, 2018 from 11:00 am to 1:00 pm at Cumerford-Hurd Funeral Home, Peoria. A private graveside military service will be held on Tuesday, August 14, 2018 at Camp Butler near Springfield. Memorials may be made to OSF Hospice. Robert's online memorial website may be viewed at www.cumerford.com

To send flowers to the family or plant a tree in memory of Robert Whalen, please visit our floral store.

To send flowers to the family in memory of Robert Whalen, please visit our flower store.