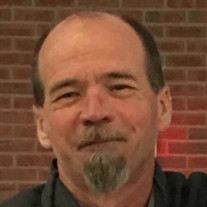 Robert E. Raynor, Jr., age 53, of Chillicothe passed away on Friday, June 21, 2019 in Waukesha, WI.
Robert was born on April 21, 1966 in Shirley, MA. the son of Robert E. and Dianne R. (Kleber) Raynor, Sr.
When Robert graduated from high school he went to work for Disney World where he met Crystal L. Prater. They were married on Oct. 10, 1987 in Deltona, FL.
Surviving are his wife and their children, Courtney (Matt) Brown of Hanna City, Cheyne (Erica) Raynor of Chillicothe, and Cassie (Wesley) Grove of East Peoria; one grandson James Robert Grove of East Peoria; five sisters, Shawn (Tim) Breen of Wylie, TX., Rhonda (Todd) Bonnett of Longwood, FL., Sherri (Marquette) Smith of Orlando, FL., Becki Raynor of Fort Lauderdale, FL., Brandi (Brian) Hoffman of Ohio, several nieces and nephews, and his parents Robert and Dianne Raynor of Savannah, GA. He was preceded in death by his grandparents Robert and Mary Kleber, Ed and Louise Raynor, and his Uncle David Kleber with whom he had a special bond.
Robert worked for AECOM as a facilities manager for over 11 years.
Rob enjoyed hunting, fishing, yard work, bowling, cooking, and tinkering with motors. He was an avid Bass Pro Shopper; he may have even had an exclusive membership. He looked forward to his annual fishing trip to Minnesota with family. He enjoyed spending time with his kids and when his grandson, James aka "Little Man", was born, he became his priority.
Friends and family are invited to a celebration of life on Sat. June 29, 2019 starting at 12:00 noon at his home located at 15129 N. Old Galena Road, Chillicothe. In lieu of flowers, donations can be made to St. Jude Children's Research Hospital and the American Diabetes Association.
Weber-Hurd Funeral Home, Chillicothe in charge of arrangements.

To send flowers to the family or plant a tree in memory of Robert Edward Raynor, please visit our floral store.

To send flowers to the family in memory of Robert Raynor, please visit our flower store.