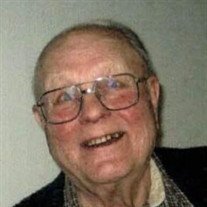 Bob served in the U.S. Navy during World War II. He then went to Pillsbury Baptist College in Owatonna, MN and became an ordained minister. While in college, he pastored at a small church. He then pastored at churches in Nebraska, Minnesota, Iowa and Illinois. Bob also ministered at the city mission in Peoria as well as doing devotions at Apostolic Christian Skylines in Peoria and Heritage Manor in Chillicothe. He was a member of Crossroads Baptist Church. Bob enjoyed fishing, mushrooming, and playing games. He was an avid Cubs fan and loved spending time with his family.

Services will be held on Tuesday, September 29, 2020 at 2pm at Weber-Hurd Funeral Home in Chillicothe. A visitation will be held one hour prior to the services at the funeral home. Social distancing and wearing of facemasks requested. Rev. Jeremy Peters and Rev. James Clark will be officiating. Burial with military honors will be at Chillicothe City Cemetery. Memorials may be made to Crossroads Baptist Church. Online condolences may be made through www.hurdfamilyfunerals.com


To send flowers to the family or plant a tree in memory of Robert Dale Ohlmann, please visit our floral store.

To send flowers to the family in memory of Robert Ohlmann, please visit our flower store.