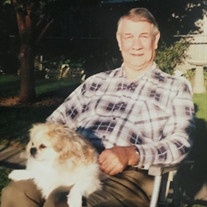 Robert Walter Gauwitz, age 84, of Peoria passed away in Peoria on Friday, November 10, 2017. He was born to George C. and Elizabeth C. (Schielein) Gauwitz on March 13, 1933 in Peoria Heights. He married Mary Lou Cox on June 27, 1979 in Creve Coeur. She preceded him in death on June 7, 2006. He was also preceded in death by three brothers, Jacob, George, and Donald; and three sisters, Ruth, Evelyn, and Ann. Robert is survived by 17 proud nieces and nephews and numerous great nieces and great nephews. Robert was a lifelong employee at Peoria Pump and Equipment where he worked as a mechanic. He enjoyed gardening and fixing things. Robert was the last survivor of (The Places) Model Fruit and Vegetable Farm on Galena Road in Peoria Heights (Currently Bielfeldt Park.) A funeral service for Robert will be held at 11:00 AM on Tuesday, November 14, 2017 at Cumerford-Hurd Funeral Home in Peoria. Visitation will be held the evening before at the funeral home from 5:00-7:00 PM. Burial will be held at Swan Lake Memory Gardens. Memorials in honor of Robert may be made to OSF Hospice or TAPS. Robert's online memorial website may be viewed at www.cumerford.com

To send flowers to the family or plant a tree in memory of Robert Gauwitz, please visit our floral store.

To send flowers to the family in memory of Robert Gauwitz, please visit our flower store.