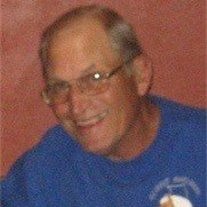 Richard Louis Schmidt, age 76, of Chillicothe, passed away on Thursday, March 14, 2019 at UnityPoint Health Methodist in Peoria.   Dick was born on June 23, 1942 in Peoria to Joseph "Bernie" and Ilene E. (Flutcher) Schmidt.  He married Nancy M. Blumenshine on October 28, 1962 in Washington, IL. Surviving are his wife, Nancy; two sons, Brian (Julie) Schmidt of Janesville, IA and Bruce (Nancy) Schmidt of Chillicothe; four grandchildren, Joseph, Jordan and Jessie Schmidt and Rose Wurster; and his sister, Phyllis Bowcott of Tuscon, AZ.  He was preceded in death by his parents. Dick served in the U.S. Army.  He worked in the purchasing department for CILCO in Lacon and Peoria and then in engineering for Ameren, retiring in 2000.  He was a member and Past-Commander for the American Legion Post #593 in Lacon and a member of the George Washington Mason Lodge #222 in Chillicothe.  Dick raised Haflinger horses and was the Past-President and Treasurer of the Illinois Haflinger Association. Services will be held on Tuesday, March 19, 2019 at 11am at Weber-Hurd Funeral Home in Chillicothe.  Visitation will be held from 9am to 11am also at the funeral home.  Rev. Ron Martz will be officiating.  Burial will be at Chillicothe City Cemetery.  Memorials may be made to the charity of the donor's choice.

To send flowers to the family or plant a tree in memory of Richard L. Schmidt, please visit our floral store.

To send flowers to the family in memory of Richard Schmidt, please visit our flower store.