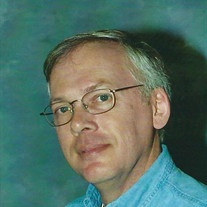 Richard R. Crain, age 60, of Edelstein passed away at UnityPoint Proctor Hospital on Thursday, February 16, 2017. He was born in Peoria on February 20, 1956 to Maurice Ralph and Helen Louise (McIntyre) Crain. He married Marilyn K. (Larash) Crain on September 2, 2005 in Las Vegas, NV. Richard is survived by his wife Marilyn of Edelstein; mother, Helen Crain of Peoria; stepsons, Brian Donovan of Edelstein and Andrew Doty of St. Louis; sister, Ellen (Mark) Balagna of Trivoli; nephews, Austin Davies of Peoria and Chase (Amber) Davies of Norfolk, VA; two aunts; two uncles; dozens of cousins; and his beloved dogs, Cooper and Bailey. He was preceded in death by his father. Richard graduated high school and attended classes at ICC for his CDL. He was a Quality Control Engineer at Caterpillar, where he worked for 22 years, retiring in 2015. Richard was a tall and handsome man who carried himself with confidence. He was kind, soft spoken, had the gentlest soul, and saw the good in everyone - except bad drivers. He never got angry or frustrated, and was fiercely devoted to his friends and family. Every Wednesday night, he spent time with his friends across the street. Richard and Marilyn spent their time enjoying all nature had to offer. Every week, he would chop down trees to burn in his wood stove, keeping the house warm in the winter. Their favorite spot to sit and talk was Banner Marsh, where he used to hunt duck and geese. Richard will be missed by his old hunting buddy Cooper, a Grand Champion Hunter Retriever trained in hand signals, whistles, and voice commands. Richard enjoyed grilling, baking bread, making homemade wine with honey from the bees he raised, roasting his own coffee, canning, woodworking, and taking time to feed the birds, and he loved sharing everything he made with the people he loved. Richard was intelligent, and things that would be difficult for others, like figuring out how different electronic "toys" worked, came easily to him. He was a music enthusiast and enjoyed listening to tunes on vinyl, where "you could hear all the imperfections." He spent countless hours after closing time at Electronics Diversified, talking with friends about different audio systems and components. He built his own stereo system, and it meant the world to him when he had the opportunity to play it for others. Richard served in the Navy from 1980-1984 and went to a Navy Reunion last year in Virginia Beach to spend time with his brothers, whom he loved dearly. Richard was a member of the Masons Grand Lodge of Colorado A.F. and A.M. St. Vrain Lodge #23, the Heart of Illinois Beekeepers Association, and the USS McCandless Association. Richard was a gem, and one of those people you didn't see coming. He and Marilyn were the perfect pair and spent many wonderful years together. A funeral service for Richard will be held at Weber-Hurd Funeral Home on Monday, February 20, 2017 at 11:00 AM. Rev. Bob Debolt will officiate. Visitation will be held two hours prior to the service. In lieu of flowers, donations may be made to any animal shelter or veterans charity of the donor's choice. Richard's online obituary may be viewed at www.weberhurdfuneralhome.com

To send flowers to the family or plant a tree in memory of Richard Crain, please visit our floral store.

To send flowers to the family in memory of Richard Crain, please visit our flower store.