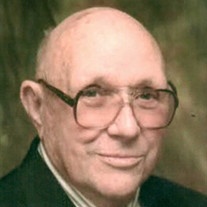 Richard graduated from Chillicothe High School and went into the U.S. Army. He served during WWII in many battles and campaigns in the European-African-Middle Eastern Theater, including the Battle of the Bulge and the Battle of Anzio.

After being discharged from the Army he resided in Wyoming where he farmed most of his life until he retired. He was also a Tax Assessor for Stark County, member of the Valley School Board and the Wyoming Congregational Church.

Richard married Imogene I. Windaugh on May 25, 1946 in Chillicothe and after her passing in October 1971 he married Phyllis E. Robbins in Wyoming in November of 1972. She also preceded him in death on March 15, 2010.

A funeral service will be held on Saturday, September 26, 2015 at 12:00 noon at Weber-Hurd Funeral Home, Chillicothe. Visitation will be held one hour prior to the service time at the funeral home. Rev. Ross Wyman will officiate. Burial will be held in the Chillicothe City Cemetery with Military Rites. Memorials may be made to St. Joseph's Nursing Home or to the donor's choice.

Richard's online memorial website may be viewed at www.weberhurdfuneralhome.com


To send flowers to the family or plant a tree in memory of Richard Wayne Bauer, please visit our floral store.

To send flowers to the family in memory of Richard Bauer, please visit our flower store.