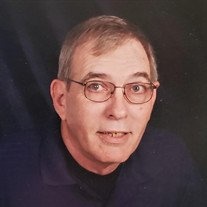 Rich was born on August 30, 1950 in Danville, Illinois to Riley Lee and Patsy Ruth (Wiley) Bartlow. He married Susan Lea Harn on August 22, 1971 in Fairview, Illinois.

Surviving are his wife, Susan; his children, Amanda Lea (Nathan) Oedewaldt and Ryan Lee Bartlow, both of Chillicothe, IL; and two grandchildren, Henry and Emilea Oedewaldt. He was preceded in death by his parents.

Richard was a route salesman for Colonial and Interstate Brands (Butternut Bread) for 30 years, retiring in 2005. After he retired, he worked security for the Par-A-Dice casino in East Peoria. He also tirelessly and lovingly volunteered at his daughter's restaurants, Tailgaters in Dunlap and Castaways in Chillicothe. Rich attended both Prospect United Methodist Church and Mossville United Methodist Church. Throughout his life, Rich was an active member of Peoria Ambucs, Lake of the Woods Home Owner's Association, Peoria County Health Department Board, Alliance Library Board and the Dunlap Library Board. He enjoyed playing cards, especially Bridge, golfing, video poker and trips to the casino, and reading science fiction. His grandchildren were a special joy and the highlight of his days. Rich never knew a stranger and will be missed by many who knew him.

A private graveside service will be held on Thursday, March 26, 2020 at Chillicothe City Cemetery. A Celebration of Life will be held at a later date. Arrangements are under the care of Weber-Hurd Funeral Home in Chillicothe and online condolences may be made through www.weberhurdfuneralhome.com

To send flowers to the family or plant a tree in memory of Richard Lee Bartlow, please visit our floral store.

To send flowers to the family in memory of Richard Bartlow, please visit our flower store.