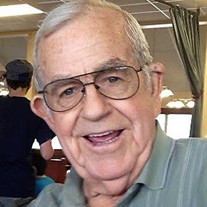 Paul R. Rushin, 87, of Chillicothe, passed away at his home on Jan. 18, 2018, surrounded by his family. Paul was born on January 2, 1931, in Butler County, MO, to Robert and Millie (Rice) Rushin. He was one of seven boys among 10 siblings. He married the former Dolores Christine Clark on January 12, 1951 in Poplar Bluff, MO. She survives. He is also survived by one sister, Mrs. Kathren Riley, of Poplar Bluff, MO. Mr. Rushin is the father of five children: Paula "Suzie" Hinch of McKinney, TX; Greg (and Cynthia) Rushin of Plano, TX; Michael (and Sue) Rushin of Anthem, AZ.; Stacie (and Art) Biggs of Gruene, TX; and Jeff Rushin of Chillicothe. He has 10 grandchildren: Ryan (and Melissa) Hinch of Emory, TX; Ami (and Dr. Jeff) George of McKinney, TX; Stephen (and Chris) Rushin of Chicago; Robert (and Derek) Rushin of San Francisco; Paul (and Jill) Rushin of Langhorne, PA., Dean Rushin of Anthem, AZ.; Jenna Rushin of Denver; Adam (and Kim) Biggs of Austin, TX; Andrew (and Wes) Biggs of Edwardsville; Abbie Biggs (and Evan Kendall) of Overland Park, KS. He also has six great-grandchildren, and numerous nieces, nephews and cousins. Mr. Rushin attended college at Southeast Missouri State (SEMO), where he played football for two years on a scholarship. He also played basketball for the Redhawks. He was a veteran of the U.S. Navy during the Korean War, serving a four-year tour aboard an aircraft carrier in the Pacific Ocean from 1951 to 1955. Mr. Rushin served two terms on the Illinois Valley Central Unit Dist. 321 Board of Education, serving as president in 1974 when they broke ground on the new high school at 1300 W. Sycamore. He worked as a sales manager for Standard Oil of Indiana (later Amoco Oil) for 31 years, retiring at the age of 55 in January 1986. An avid golfer, he and his wife Dolores were longtime members at Lacon Country Club and Arrowhead Country Club. They traveled extensively after his retirement, planning much of their trips around golf with family and friends. Mr. Rushin was a longtime and beloved boys basketball coach at St. Edward School and Catholic Church, where he spent a good portion of the 1960s and 1970s volunteering his time with youth sports programs. Visitation will be held at Weber-Hurd Funeral Home in Chillicothe from 4 p.m. to 8 p.m. on Sunday, Jan. 21, with recitation of the Rosary at 7 p.m. A funeral mass will be held at 10 a.m. on Monday, Jan. 22 at St. Edward Catholic Church. Msgr. Michael C. Bliss will be the celebrant. A visitation will be held one hour before services at the church. Burial will immediately follow at Chillicothe City Cemetery. A luncheon will be held for family and friends at Parish Hall at St. Edward Catholic Church following burial. In lieu of flowers, memorials may be made to the Billy Galindo Inspirational Scholarship Fund. Paul's online memorial may be viewed at www.weberhurdfuneralhome.com.

To send flowers to the family or plant a tree in memory of Paul Rushin, please visit our floral store.

To send flowers to the family in memory of Paul Rushin, please visit our flower store.