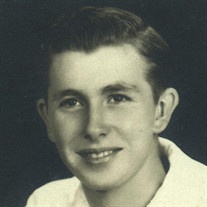 Patrick John Sweeney, 91, born in Chillicothe but longtime resident in the Edgewild Subdivision of Peoria, Illinois died at 4:30 am Sunday, August 9, 2015, at Lutheran Hillside Village of Peoria with his children at his bedside.

He served in the U.S. Navy during World War II, receiving several commendations and was honorably discharged in 1946 after the end of the War at the rank of Second Lieutenant.

Patrick attended Purdue University for two years, and the Navy then transferred him to the Illinois Institute of Technology where he graduated with a Bachelors degree in Mechanical Engineering.

After the war, he worked for General Motors traveling throughout the country as a senior consultant in their Diesel Locomotives Division. He returned to Peoria and after a brief time working at Caterpillar, became the Plant Manager at Dawes Laboratories in Peoria, Illinois and later at their larger plant in Chicago Heights, Illinois. He returned to Peoria as the owner and manager of Paxam Corporation, a Feed Manufacturer, and in his later years started Display Innovators, a company that sold sales and advertising displays throughout the United States.

Always a fan of he Big Band era, instilled by his mother, Patrick became one of the premier ballroom dancers in the Midwest, and for almost 30 years (until his mid 80s) traveled through the State of Illinois and neighboring states dancing and competing with his long time dance partner, Helen Young of East Peoria, Illinois.

For almost 30 years, into his late 80s, Patrick also worked out daily at the YMCA on North Fleming Lane in Peoria and attended activities at the Humana Senior Center. He also occasionally played the piano or the melodica with the Central Illinois Banjo Club in his later years. Music and dancing was the inspiration of his life.

Weber-Hurd Funeral Home in Chillicothe is assisting the family with private burial arrangements next to his mother at the Chillicothe City Cemetery.

To send flowers to the family or plant a tree in memory of Patrick John Sweeney, please visit our floral store.

To send flowers to the family in memory of Patrick Sweeney, please visit our flower store.