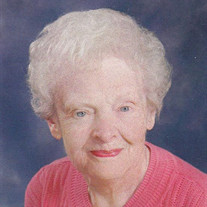 Norma "Gay" (Adkisson) Houser, age 90, of Peoria passed away on Saturday, February 25, 2017 at Buehler Home in Peoria. She was born on December 21, 1926 in Roseville, IL to Seth and Lorene (Marshall) Adkisson. A 1944 graduate of Peoria High School, she married Charles Raymond Houser on September 25, 1946. Gay is survived by her children, C Scott (Candice) Houser of Maryville, TN and Debra Houser of Peoria; grandchildren, Matthew (Grace) Houser of Monument, CO, Seth (Amy) Houser of Sevierville, TN, Sarah (Jay) Stenfors of Ft. Collins, CO, Zachary (Kristen) Houser of Franklin, TN, and Bethany (Thomas) Nguyen of Athens, GA; and 13 great-grandchildren. Gay was a member of First Baptist Church of Peoria, and was a member and officer of both the Peoria Emblem Club and American Business Women's Association. She enjoyed doing word puzzles and spending time with her grandchildren, great-grandchildren, and grand-dogs. After her retirement from the Illinois American Water Company, she volunteered over 12,500 hours at Proctor Hospital. The family wishes to thank the loving caregivers at Buehler Home and to also especially thank relatives Marylou, Allyssa, and Jim Russell for the many hours spent visiting, assisting, and comforting Gay during these past months of illness. A memorial service for Gay will be held on Friday, March 3, 2017 at 11:00 AM at First Baptist Church of Peoria. Visitation will be held one hour prior to the service at the church. Interment will be private and for family only. In lieu of flowers, memorial contributions in honor of Gay may be made to First Baptist Church of Peoria or Camp Arrowwood, 3601 Lyon Springs Road, Sevierville, TN 37862. Gay's online memorial website may be viewed at www.cumerford.com

To send flowers to the family or plant a tree in memory of Norma Houser, please visit our floral store.

To send flowers to the family in memory of Norma Houser, please visit our flower store.