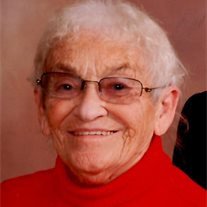 Nancie J. Shryock, age 86, of Chillicothe, passed away peacefully on Monday, February 11, 2019 at her home.  Nancie was born on June 27, 1932 in Havana, IL to Ottis and Edith (Brown) Mooney.  Nancie married Joseph P. Shryock on May 4, 1957. Surviving are her husband, Joseph; three sons, Joe Shryock, Jr. of Edelstein, IL, Timothy Shryock of Morris, IL and Patrick Shryock of Nak Nek, Alaska; one daughter, Molly Shryock of Jacksonville, IL; eight grandchildren and seven great-grandchildren.  She was preceded in death by her parents; sister, Marian Dennison; one grandchild. Nancie was a graduate of Havana High School and the St. Francis School of Nursing.  She also completed her Master's degree in nursing from St. Francis College in 1986.  After a short time with the American Red Cross, she spent the remainder of her career in nursing and supervision at both Proctor Hospital and St. Francis.  She retired on their farm outside of Chillicothe continuing her work as a master gardener, while traveling extensively. Cremation rites will be accorded and a Funeral Mass will be held on Saturday, February 16, 2019 at 10:30am at St. Edward's Catholic Church in Chillicothe.  Visitation will be held one hour prior to the mass.  Interment of ashes will be at St. Joseph Cemetery at a later date.  Memorials may be made to St. Edward's Catholic Church or Rescue 33.  Arrangements were handled through Weber-Hurd Funeral Home in Chillicothe.

To send flowers to the family or plant a tree in memory of Nancie J. Shryock, please visit our floral store.

To send flowers to the family in memory of Nancie Shryock, please visit our flower store.