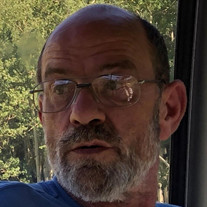 Mike was born on February 17, 1953 in Rantoul, Illinois to Paul E. and Beverly J. (Swartz) Holden. He married Sandra Brackett on September 22, 1990 in Chillicothe.

Surviving are his wife, Sandra; his daughter, Amy Ricca of Bartonville, IL; his son, Steven Holden of Grand Junction, CO; six grandchildren, Austin Ricca, Jesse Holden, Dusty Langdon, Briar Holden, Melissa Ricca and Samantha Ricca; and one great-granddaughter. Also surviving are two sisters living in Indiana. He was preceded in death by his parents and his brother, William "Bill" Holden.

Mike worked in collision and autobody repair for over 45 years in the Peoria area and most recently worked with his son at, Steve's Collision. Mike was quite the handyman and always willing to lend a helping hand to others. He also enjoyed bowling with Sandy.

A visitation will be held on Sunday, March 21, 2021 from 3pm to 5pm at Weber-Hurd Funeral Home in Chillicothe. Cremation rites will be accorded following visitation and a private graveside service will be held at Chillicothe City Cemetery. Memorials may be made to OSF Richard L. Owens Hospice Home. Online condolences may be made through www.weberhurdfuneralhome.com


To send flowers to the family or plant a tree in memory of Michael Paul Holden, please visit our floral store.

To send flowers to the family in memory of Michael Holden, please visit our flower store.