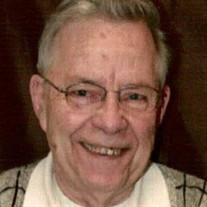 Surviving are his wife, his children, Linda (Steve) Froggett of Seattle, WA, Cheryl (Rick) Johnson of Chillicothe, and Brent Atteberry of Chicago; grandchildren, Steve (Michele) Pruitt of Sammamish, WA, Trevor (Diana) Johnson of Hillsborough, NJ, and Rachel (Josh) Johnson Curry of Henry; and great-grandchildren, Avery, Emerson, Gwen, Vivienne, Alex, and Elliotte. He was preceded in death by his parents and his twin brother, Bill.

For 44 years, Max worked as a broadcast engineer for WEEK - TV before retiring in 2001. He was a member of Mossville United Methodist Church, where he played Dartball and lent his beautiful baritone voice to the choir. He was also a member of Pearce Community Center, where he line-danced and, later, played the music at the group's local performances.

A kid at heart, Max especially loved all of his grandchildren and great-grandchildren and made each of them the center of his world when he was with them. He loved wearing his red Santa hat and passing out gifts on Christmas Eve, reminiscing about his youth, and just being among family. Max's kind spirit will live on through them.

A funeral service will be held on Wednesday, January 29th, 2020 at 11am at Weber-Hurd Funeral Home, Chillicothe. Visitation will be held at 9am at the funeral home. Burial will be in Chillicothe City Cemetery. In lieu of flowers, memorials may be made to Mossville United Methodist Church, or a charity of your choice.


To send flowers to the family or plant a tree in memory of Max Atteberry, please visit our floral store.

To send flowers to the family in memory of Max Atteberry, please visit our flower store.