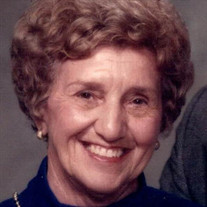 Maude was born on August 20, 1918 in Chillicothe to Clarence and Beulah (Wright) Routh. She married James N. Mullen on February 18, 1939 in Chillicothe. He preceded her in death. Also preceding her in death are her daughter, Julie Casper, one grandson and four sisters.

Maude and her husband owned a contracting business. They worked together to develop Mullen Manor. They were founding members of Arrowhead Country Club.

She was a loving wife, mother and grandmother and her family was very important to her. She was a member of St. Edward Catholic Church in Chillicothe, a former member of Arrowhead Ladies Golf League, University Club and played bridge in various clubs in Chillicothe.
Maude's family would like to thank the kind and caring staff at Heritage Manor.

A Funeral Mass will be held on Thursday, January 23, 2020 at 11am at St. Edward Catholic Church with visitation held one hour prior to the service at the church. Burial will be at Chillicothe City Cemetery. Memorials may be made to St. Edward Catholic School. Arrangements were handled through Weber-Hurd Funeral Home in Chillicothe.


To send flowers to the family or plant a tree in memory of Maude E. Mullen, please visit our floral store.

To send flowers to the family in memory of Maude Mullen, please visit our flower store.