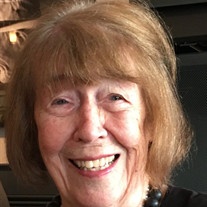 Mary Jane Hartzell, of Chillicothe, Illinois, died peacefully on June 7, 2018 at Heritage Health-Chillicothe. She was born in Streator, Illinois, on November 30, 1922 to Carl Harrison and Eugenia Miller Potter. She married Paul David Hartzell on May 2, 1942. He preceded her in death in 2000. Following the death of her mother, Mary Jane lived with her maternal grandparents, Mr. and Mrs. James Miller, whose house still stands on Fourth Street. The house of her great grandfather, John Christian Londstrom, still stands on Second Street. He built it himself after returning from the Civil War. Mary Jane (familiarly known as Maje) was a fifth generation Chillicothean, a direct descendent of Christian Londstrom, her great, great grandfather. She was proud of her Chillicothe roots and encouraged each of her children to remember our family stories and value our hometown on the Illinois River. Mary Jane is survived by three daughters: Joan (Richard) Read; Sally (Fred) Pilcher Chesek; Kay (Joe) Vespa; and one son, Mark (Janet) Hartzell; eight grandchildren: Matt (Roya) Pilcher; Lily (Chris) Pilcher Lanehart; Rick (Clair) Read; and Corey Read; Mike and Maggie Vespa; and Jonathan and Andrew Hartzell; and two great grandchildren, Roxy and Frankie Pilcher. Ava Potter Pilcher, Mary Jane's first great grandchild, preceded her in death at the age of seven months. During World War II, Mary Jane was secretary to Dr. Elmer Bruggman, one of the scientists of the Chicago Manhattan Project that created the atom bomb. Later, Mary Jane was a columnist and associate editor of Peoria OBSERVER 1963-1971 and realtor associate with Jim Maloof Realty. Her civic contributions included: former board member of Lakeview YWCA and American Red Cross Grey Lady volunteer at Proctor Hospital, volunteer docent at Lakeview Museum, and volunteer at St. Francis Hospital. Throughout it all, Mary Jane loved her family, friends, wine, patio parties, and Nina Simone. Of special note, the family wishes to express their eternal gratitude to the staff, caregivers, and residents at Evergreen Assisted Living in Chillicothe. She loved you all. No service will be held. As per her wishes, her remains have been donated to The Anatomical Gift Association of Illinois. In lieu of flowers, memorial donations may be sent to the Ava Potter Pilcher Foundation, a charitable, tax-exempt organization, dedicated to promoting the awareness of and research for Bronchopulmonary Dysplasia, or BPD. (avapotterpilcher.org http://avapotterpilcher.org).

To send flowers to the family or plant a tree in memory of Mary Hartzell, please visit our floral store.

To send flowers to the family in memory of Mary Hartzell, please visit our flower store.