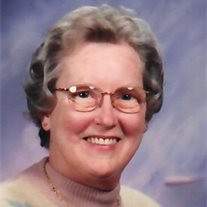 Mary Jane Braun (Murphy), 84, of Chillicothe died on Sunday Oct. 15, 2017 at Heritage Health in Chillicothe. She was born January 7, 1933 in Peoria to James A. and Rena V. (Newell) Murphy. Surviving are two sons Lee (Sarah) Braun and Dean (Candi) Braun both of Chillicothe, and one daughter Sue (Donald) Hoffman of rural Chillicothe. Also surviving are her brothers Jack D. Murphy, Sparland and James L. "Jimmy" Murphy of Peoria as well as seven grandchildren. She was preceded in death by her parents. Mary Jane graduated from Chillicothe Township High School the Class of 1950. She later attended several classes at Illinois Central College. Mary Jane worked at Ben Franklin, J.C. Penny, Parkhill Nursing Home and Coast to Coast Hardware all in Chillicothe. She also worked at Caterpillar, BB Plant, in Mossville and several years as the Secretary at the First United Methodist Church in Chillicothe where she was a lifetime member. Mary Jane was previously a member of the Chillicothe Historical Society, the Pearce Community Center, served several years as an election judge and was a committee member for Boy Scout Troop 91 in Chillicothe. Mary Jane was well known for baking angel food birthday cakes. According to an article written by Jack L. Bradley in 2009 for the Chillicothe Independent it was estimated she had made around 6000 cakes over 20 years and hand delivered them to family and friends in the Chillicothe area. Mary Jane loved taking care of her grandchildren who were the "Joy of Her Life". She will be greatly missed. Funeral Services will be held on Thursday Oct 19 at 3:00 pm with visitation from 1:00-3:00. At Weber- Hurd Funeral Home in Chillicothe. Rev. R. Martz will officiate. In lieu of flowers the family requests memorial contributions be made to the Alzheimer's Association, Hospice and the First United Methodist Church in Chillicothe. Mary Jane's online website may be viewed at www.weberhurdfuneralhome.com

To send flowers to the family or plant a tree in memory of Mary Braun, please visit our floral store.

To send flowers to the family in memory of Mary Braun, please visit our flower store.