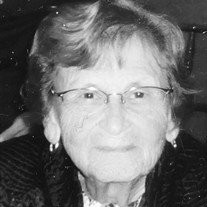 Martha H. Chambers, age 86, of Chillicothe, passed away on Tuesday, March 5, 2019 at UnityPoint Health Proctor in Peoria. Martha was born on January 16, 1933 in Coraopolis, PA to Henry Hallard and Ruth (Gould) Hoover.  She married Danny T. Chambers in June 1963 and he preceded her in death in 1986.  Also preceded her in death are her parents, her brother, and one grandchild. Surviving are children, Timothy Chambers of Chillicothe, Leslie Chambers of Chillicothe, Kim (Butch) Zannacker of Henry, Robert Chambers of Chillicothe and Jack (Sherry) Chambers of Chillicothe; nine grandchildren and 14 great-grandchildren. Martha was a rehabilitation therapist for Dr. Ernest Adams and later for Dr. Kevin Rice in the Proctor Professional Building for over 40 years.  She was a member of Twin City REACT and the Chillicothe Saddle Club.  She taught country line dancing for many years and volunteered for several years at the Rescue 33 Donut Days as well as at the many events at Three Sisters Park. A visitation will be held on Saturday, March 9, 2019 from 4pm to 6pm at Weber-Hurd Funeral Home in Chillicothe.  Cremation rites will be accorded following the visitation.  Memorials may be made to the animal shelter of the donor's choice.

To send flowers to the family or plant a tree in memory of Martha H. Chambers, please visit our floral store.

To send flowers to the family in memory of Martha Chambers, please visit our flower store.