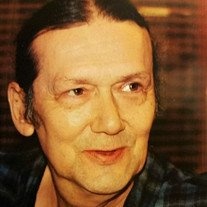 Marshall Adams, 59, of Chillicothe passed away unexpectedly on Monday, January 23, 2017 in Chillicothe. He was born on July 31, 1957 in Peoria, the son of the late Laverne and Joanne (Ramos) Adams. He married the love of his life Antonia (Toni) Adams on August 5, 2004. She preceded him in death on March 7, 2015. Marshall was employed by Western Yeast Company as well as Pearce Community Center, both in Chillicothe. He was an avid pool player who competed in leagues where he won many tournaments. Marshall had a love of animals and doted on his precious fur babies, especially his dog Emma. Marshall was an incredibly kind and giving man who was loved by all who knew him. Marshall is survived by his mother, Joanne Adams of Chillicothe; two brothers, Ricardo Adams of Chillicothe and Roderick Adams of Freeport; one sister, Julia Johnson of Chillicothe; one step-son Andy Sorrenson of Chillicothe; one niece Brook (Donnie) Spaith of Sun Prairie, WI; one nephew Mathew (Jamie) Adams of Madison, WI; as well as six great-nieces and great-nephews. A funeral mass will be held for Marshall at 11:00 a.m. on Saturday, January 28, 2017 at St. Edward Catholic Church in Chillicothe. Family and friends are invited to visitation with the family at the church two hours prior to the service. Burial will be at Chillicothe City Cemetery with Fr. Keith Walder officiating. Memorials in Marshall's honor may be made to St. Edward Catholic Church. Marshall's online memorial tribute may be viewed at www.weberhurdfuneralhome.com.

To send flowers to the family or plant a tree in memory of Marshall Adams, please visit our floral store.

To send flowers to the family in memory of Marshall Adams, please visit our flower store.