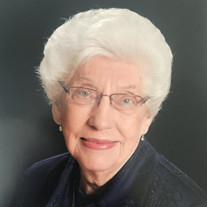 Marsha Lucile (Wrigley) Nott, age 97, passed away at Proctor Place, where she resided for the last seven years, on Thursday, August 31, 2017. She was born to the late Ira M. and Vesta (Watson) Wrigley on July 27, 1920 in Macomb. She married Harry Arnold Nott on April 12, 1947 in Peoria, and they celebrated 53 years of marriage before his passing on June 19, 2000.  Marsha was also preceded in death by one brother, two sisters, and one grandson. She is survived by two sons, Jerry (Kathy) Nott of Houston, TX and Thomas (Marcy) Nott of Groveland; four grandchildren, Sara Harp (Jerry Harp), Emily (Hayden) Villamercado, Tad (Ashley) Nott, and Jamie Nott; and four great-grandchildren, Isabella, Paul, Jay, and Lucy. After graduating from college, she began her working career at Peoria Carthage Company where she made many lifelong friends. Marsha retired from Schaefer Electric, Inc. in 1980, where she worked as a bookkeeper. Throughout her life, she was a member of Delta Beta Phi Sorority, Peoria Emblem Club #121, enjoyed volunteering with the American Red Cross, was an active member of Women's Civic Federation, and was a former member of various Peoria golf leagues. She was also a member of University United Methodist Church where she was active for many years in United Methodist Women. Cremation rites have been accorded and a graveside service for Marsha will be held at Swan Lake Memory Gardens at a later date.  Memorial donations in honor of Marsha may be made to her church. Marsha's online memorial website may be viewed at www.cumerford.com

To send flowers to the family or plant a tree in memory of Marsha Nott, please visit our floral store.

To send flowers to the family in memory of Marsha Nott, please visit our flower store.