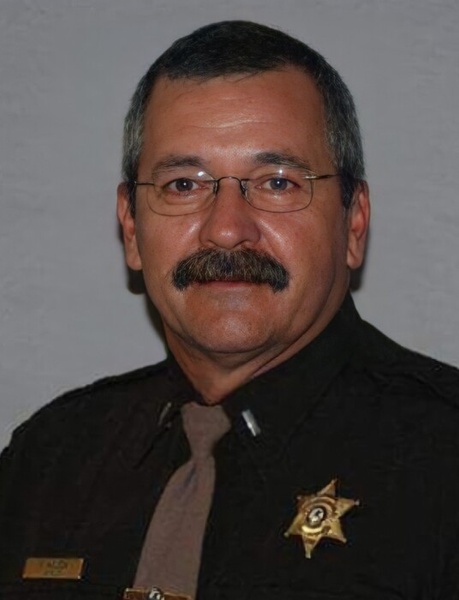 Surviving are his wife, Angie; his daughters, Tiffany Molleck of Chillicothe, IL and Melissa (Zach Patterson) Hauck of Peoria, IL; and his grandchildren, Mason, Jackson, Mallory, Ian, Markus, Matthew and Tyler.  Also surviving are his mother, Sammie Molleck of Canton, IL; his siblings, Christine Keeling of Ocala, FL, David (Virginia) Molleck of Chillicothe, Lisa (Steve) Walker of Chillicothe and Teresa (Sam) Condon of Ridge Crest, CA; his half-siblings, Chuck Sanders of 29 Palms, CA and Bunny Farmer, of Las Vegas, NV; and many nieces and nephews.  He was preceded in death by his father; his brother, Michael Molleck and his grandson, Ryan.

Mark served in the U.S. Air Force from 1974 to 1977.  He was a patrol officer for the Peoria Heights Police Department from 1986 to 1989 before joining the Peoria County Sheriff’s Department from 1989 until he retired in 2017.  While with the Sheriff’s Department, Mark was awarded many commendations and his greatest accomplishment was the development of the Peoria County Search and Rescue.  He was the Vice President of the Chillicothe Fire Protection District Board of Trustees, a member of the George Washington Masonic Lodge #222 A.F. & A.M., the Mohammed Shrine and the Valley of Peoria Scottish Rite.  He was also a member of Mt. Hawley Community Church.  Mark enjoyed woodturning, operating his Ham Radio, hunting, fishing and going to the Chillicothe Sportsman Club.  Above all, he loved spending time with his family and he’d say his greatest accomplishment in life was being a dad and grandpa.  Mark was also passionate about sharing his faith with others.

Cremation rites will be accorded and a visitation will be held on Friday, February 4, 2022 from 5pm to 7pm at Weber-Hurd Funeral Home in Chillicothe.  A first responder walk through will be held at 6pm and Masonic Rites at 7pm. A memorial service will be held Saturday, February 5, 2022 at 11am at Mt. Hawley Community Church.  Pastor Darnell Starks will be officiating.  Memorials in his name may be made to his church or to the Peoria County Sheriff’s Department in the care of the Mark Molleck Memorial Fund which will be devoted to the Care Trak Program that Mark initiated in Peoria County.  Online condolences may be made through www.weberhurdfuneralhome.com

To send flowers to the family or plant a tree in memory of Mark W. Molleck, please visit our floral store.

To send flowers to the family in memory of Mark Molleck, please visit our flower store.