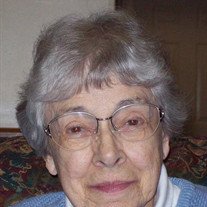 Marjorie Brumbaugh Bush passed away on March 27 at Lutheran Hillside Village, Peoria. She was born February 16, 1921 in Wilkensburg, Pennsylvania to Vernon and Susan Stoner Brumbaugh.   Marjorie attended Bucknell University and Strayer Business College.  During WWII she was employed in Washington DC for the Office of War Information and the National Association of Housing Officials. She married Ralph Bush on September 17, 1943 in Roswell, New Mexico.  They spent many happy years from 1953-2007 in Springfield where they raised their family at Lake Springfield. Marjorie was a member of First United Methodist Church in Springfield. She volunteered as a Cub Scout den mother in Chatham and delivering Meals on Wheels in Springfield. After Ralph died in 2007, Marjorie moved to Lutheran Hillside Village in Peoria. Marjorie is survived by two children, Charles (Judith) Bush of Edwards and Susan (Sanford) Carnahan of Menlo Park, California; three grandchildren, Laura Bush, Justin (Harmony) Bush and David (Kerin) Carnahan; five great grandchildren, Hunter, Arianne, Victoria, Liam, and Veronica and one step great grandchild, Aurora.  In addition to spending time with her family, Marjorie enjoyed gardening, writing limericks, solving crossword puzzles, vacationing in Maine with a close group of Bucknell friends, and in her later years, coloring books. A visitation will be held in the Chapel at Lutheran Hillside Village, Friday April 12 from 2:00-3:00 and again on Saturday, April 13 from 1:30-2:30, followed by a memorial service at 2:30.  All events will be in the Waters of Life Chapel at Lutheran Hillside Village, 6901 North Galena Road, Peoria.  Burial will be at Camp Butler in Springfield at a later date.  In lieu of flowers the family suggests donations to the Lutheran Hillside Village Foundation, lssliving.org or to the USO, uso.org.

To send flowers to the family or plant a tree in memory of Marjorie B. Bush, please visit our floral store.

To send flowers to the family in memory of Marjorie Bush, please visit our flower store.