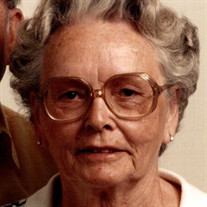 Maria D. LaPayne, of Chillicothe, died June 10 at Richard Owens Hospice home in Peoria. She was born June 16, 1926 in Bremen, Germany to Friederich Dunker and Dora Walter. She married John J. LaPayne in 1946. Her husband, John, preceded her in death on December 5, 2013. She was also preceded in death by her parents and her daughter, Eva LaPayne Cline. Maria was of the Lutheran faith.

Surviving are two daughters, Mrs. Johanna M. (Sam) McCullough of Danbury Wisconsin and Lynda D. (Doug) McKeown of Diamond, Illinois; and one son, John R. (Melody) LaPayne of Edelstein, Illinois. In addition to her children she is survived by 12 grandchildren, 22 great grandchildren and 1 great great grandchild.

Maria came to the US in December 1947 and became a citizen in 1954. She worked for Szold's in Peoria and then General Telephone (now Verizon/Frontier), retiring in 1982 from a career that included office, training and manager roles.

Many thanks to the staff at Evergreen Senior Living for their help and friendship over the past year, to her caring physicians over the years and to the OSF ER and OSF Richard Owens staff for her final care.

Maria requested cremation and there will be no visitation. Internment with private family services will be made at a later date. Due COVID restrictions a celebration of her life will be made when possible. Memorials may be made to the Illinois Veteran's Home in LaSalle, Illinois. Arrangements are under the care of Weber-Hurd Funeral Home in Chillicothe.

To send flowers to the family or plant a tree in memory of Maria D. LaPayne, please visit our floral store.

To send flowers to the family in memory of Maria LaPayne, please visit our flower store.