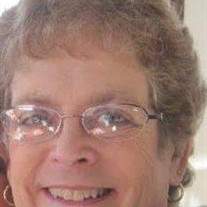 Marcia L. Diefendorf, age 67, of Peoria Heights, passed away on Monday, October 30, 2017 at OSF St. Francis Medical Center in Peoria. She was born to Robert and Lucy (Yehl) Lawrence in Peoria on February 27, 1950. She married Dan T. Diefendorf on June 16, 1990 in Peoria. Marcia is survived by her husband Dan of Peoria Heights; children, Sherri (Steve) Coake of North Pekin, Jackie (Chris) Frazee of Peoria Heights, and Rob Hymbaugh of Peoria Heights; grandchildren, Samantha Coake, Alexandria England, Tyler Frazee, Ashley England, Sheridan Coake, Andrew Frazee, Jamison Hymbaugh, and Alyssa Hymbaugh; niece, Brandy (Mike) Causey; and nephew, Robert (Mandy) Lawrence. She was preceded in death by her parents and brother, Steven Lawrence. Marcia worked for Dr. William Campbell in Peoria Heights as a receptionist from 1978 to 1986, Allied Bendix Aerospace in Peoria from 1986 to 1991 as a Reproduction Operator, Peoria Ag Lab from 1991 to 1996 as a receptionist and Reproduction Operator, and retired from Affina in 2010. In her free time, she enjoyed sewing, reading, painting, and spending time with her grandchildren, who were the light of her life. A memorial service for Marcia will be held at 7:00 PM on Monday, November 6, 2017 at Cumerford-Hurd Funeral Home in Peoria. Pastor John Plunkett will officiate. Visitation will be held two hours before the service at the funeral home. Burial will be held at a later date. Memorial donations in honor of Marcia may be made to the National Kidney Foundation of Illinois. Marcia's online memorial website may be viewed at www.cumerford.com

To send flowers to the family or plant a tree in memory of Marcia Diefendorf, please visit our floral store.

To send flowers to the family in memory of Marcia Diefendorf, please visit our flower store.