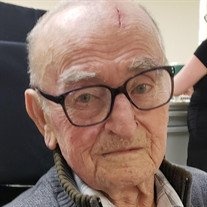 Louis Vincent Luciani, age 95, of Chillicothe, passed away on Friday, December 13, 2019 at St. Joseph Nursing Home in Lacon. Louis was born on June 19, 1924, as Luigi Vincenzo Luciani in Galliera Veneta, Italy to Paul and Augusta (Bordignon) Luciani. He married Millie E. Sewards on April 3, 1951 in Chillicothe.

Louie lived a fascinating life. His family emigrated from Italy in 1928 on account of government dictatorship. He was raised on a sugar cane farm in Australia until adventure called him to the U.S. at the age of 25. He met his wife, Millie, in Chillicothe and they went on to enjoy more than 60 years of marriage. He also traveled the country as a conductor with the Santa Fe Railroad, from which he retired in 1987.

Louie enjoyed history, travel and a good meal. He was a devout Roman Catholic and a member of St. Edward Catholic Church in Chillicothe.

A Funeral Mass will be held on Friday, December 20, 2019 at 11am at St. Edwards Catholic Church. Visitation will be held one hour prior to Mass at the church. Father Matthew Deptula will be officiating. Burial will be at Chillicothe City Cemetery. Memorials may be made to St. Joseph Nursing Home in Lacon. Arrangements were handled through Weber-Hurd Funeral Home in Chillicothe.


To send flowers to the family or plant a tree in memory of Louis Vincent Luciani, please visit our floral store.

To send flowers to the family in memory of Louis Luciani, please visit our flower store.