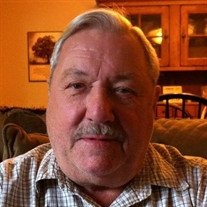 Lewis Robert Greene, age 75, of Sparland passed away Thursday, September 10, 2015 at his home.
He was born on November 1, 1939 in Sparland to Louis Edward and Mary Laurancy (Humphrey) Greene. He was married for over 53 years to Nancy Lee Lewis. They were married on February 17, 1962 at the First United Methodist Church in Chillicothe.
Lewis was raised and attended Sparland High School Graduating in 1957. He liked to tell people that he graduated in the top ten of his class, however there were only ten in his class. He will be remembered for his jokes even if he did repeat them.
Lewis worked for Hyster Tractor Company from 1959 to 1977 and worked at Caterpillar Tractor Company from 1977 until 1994. He enjoyed camping and doing his own mechanical work. He was an avid Morel Mushroom hunter. Very rarely did he ever take his car to a mechanic. With help from family and friends he even built his own log cabin. He enjoyed country music.
Surviving are his two sons and five grandchildren, Jeff (Cindy) Greene Joshua, Saharrah and Brandon of Chillicothe and Tim (Chris) Greene Hunter and Travis of Edelstien; two sisters, Ida Dalrymple of Henry and Dorothy Nighswonger of Lacon and numerous nieces and nephews . He was preceded in death by his parents and two brothers, Virgil Hankins and Glen Hankins.
Friends are cordially invited to a visitation with the family from 5-7 PM on Wednesday evening, September 16, 2015 at Weber-Hurd Funeral Home. The funeral service will be conducted at 11 AM on Thursday morning at Weber-Hurd Funeral Home. Burial will be held in the Henry Cemetery in Henry. The family requested that memorials contributions in memory of Lewis may be made to the American Heart Association or Donor's Choice. Lewis's online memorial website maybe may be viewed at www.weberhurdfuneralhome.com.


To send flowers to the family or plant a tree in memory of Lewis R. Greene, please visit our floral store.

To send flowers to the family in memory of Lewis Greene, please visit our flower store.