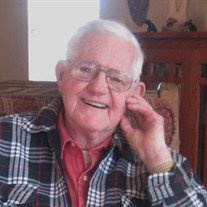 Leslie Irving Casali died on March 4, 2016 in Palm Coast, Florida at the age of 93. Les was born in Normal, Illinois on March 23, 1922, and graduated from Normal Community High School in 1941. He joined the Army in 1942, and served as a combat medic for 29 months in the China, Burma India theater of jungle operations during WWII. He also served four years in the Naval Reserves during the Korean War.
The youngest of five children of Irving L. and Theresa (Holbrook) Casali, he was preceded in death by his parents; two brothers, Vance J. Casali of Peoria and Harvey L. (Goldie) of Normal; and two sisters, Elvira Casali Sarbaugh (Chester) of Normal, and Nina L. Casali Cato (Cline) of Eureka.
Upon receiving his honorable discharge, he married May Elizabeth "Betty" Martin on May 30, 1946 in Peoria. They were married 66 years. She died on September 7, 2012. They raised three children, James L. Casali (Connie) of Peoria, Darlene E. Casali Sutton (Bruce) of Colorado and Martin L. Casali (Brenda) of New Mexico. Les was proud of his five grandchildren, Curtis Sutton (Anne) of Colorado; and Aaron Casali (Mavis), Joshua Casali, Lindsey Casali, and Cassie Casali, all of New Mexico. He was thrilled to have three little great-grandchildren, Isaiah, Emmett, and Raylan.
Les, a 50-year Free Mason, was a member of three lodges. He was Past Master in his father's Hopedale Lodge #622; Past Master of Illinois Lodge #262, and Past Master of Alta Lodge #749, serving eight years as Worshipful Master. He was a charter member of the New Daytime Cathedral Lodge #1179, and a 50-year member of the Ancient Accepted Scottish Rite, Valley of Peoria. He served as Past Most Wise Master of the Chapter of Rose Croix, where he received the Meritous Service Award in 1987. He was coroneted the 33° degree in 1991, and had the honor of having a new class of candidates named after him in 2001 He was a 50-year member of the Mohammed Temple Shrine, the oldest living Past Commander of the Shriners' Legion of Honor, - Veterans' marching and social unit that he helped organize in 1972. He was fortunate to continue his ritual and memory work past the age of 90. Les was enthusiastic about driving the children to the Shriners Burns Hospital in Chicago and the Burns Center in Cincinnati, Ohio, for treatment.
His work record included the Peoria Health Department, Keystone Steel and Wire, the Donelson Corporation, and School District 150. Les retired in 1989 as Chief Engineer at Manual High School. He always had a joke to tell, was very outgoing, and led a full and happy life. It was a family joke that everywhere he went, he would see people he knew. He was loved and will be greatly missed.
Visitation will be held at Cumerford-Hurd Funeral Home on Monday, March 21, 2016 from 5:00-7:00 p.m., immediately followed by a Masonic service. Memorials may be made to a charity of the donor's choice. A private graveside service will be held in Swan Lake Memory Gardens.
An online memorial website for Les may be viewed at www.cumerford.com.


To send flowers to the family or plant a tree in memory of Leslie Irving Casali, please visit our floral store.

To send flowers to the family in memory of Leslie Casali, please visit our flower store.