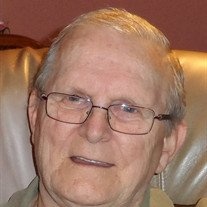 Larry L. Duckworth, age 79, passed away on Sunday, February 3, 2019 at Avantara Nursing Home in Long Grove IL. Larry was born on April 10, 1939 in Chillicothe, IL to Fred and Ruby (Sheets) Duckworth.  He married Rae Jeanne Hammer on April 8, 1961 at St. Edwards Catholic Church in Chillicothe. Surviving are his wife, Rae Jeanne; his children, Veanne (Tim) Smith of Atlanta, GA, Kelly (Keith) Smolinski of Vernon Hills, IL, Tracy (Donn) Ehnle of Bradford, IL, Cassy (Greg) Horack of Chillicothe, IL, Melanie (Raffy) Dumlao of Arlington Heights, IL and Scott (Billi) Duckworth of Bloomington, IL; his grandchildren, Camy (Brent) Smith, Austin Smith, Brian Smith, Nicole Smolinski, Erica Smolinski, Daniel (Allaina) Ehnle, Melissa (Brandon) Baer, Heidi (Cory) Joos, Alyssa (Grant) Reed, Kayla Dumlao, Jarret Dumlao and Nate Duckworth; and 10 great-grandchildren.  Also surviving are his siblings, Albert Duckworth, Ann Wilkins, Cliff Duckworth and Don Duckworth.  He was preceded in death by his parents; two half-sisters and three brothers. Larry was a devoted husband, who retired from farming and Caterpillar to become a loving caregiver to his beloved wife of 57 years.  Spoiling his many grandchildren with love and attention was his greatest accomplishment.  Babysitting, attending and cheering for them at sporting or singing events brought him abundant joy.  He was an avid Cubs fan who lived to see them win a World Series even though he always told his children they would never see them win in their lifetime.  Larry was a previous member of the Knights of Columbus and he enjoyed farming and gardening. Services will be held on Thursday, February 7, 2019 at 11am at St. Jude Catholic Church in Dunlap, IL.  Father Patrick Henehan will be officiating.  Visitation will also be held on Thursday, February 7, 2019 at St. Jude Catholic Church from 9:30am to 11am.  Entombment will be at Resurrection Mausoleum in Peoria.  In lieu of flowers, donations may be made in Larry's name to The National Multiple Sclerosis Society or Lewy Body Dementia Association.  Arrangements were handled through Weber-Hurd Funeral Home in Chillicothe.

To send flowers to the family or plant a tree in memory of Larry L. Duckworth, please visit our floral store.

To send flowers to the family in memory of Larry Duckworth, please visit our flower store.