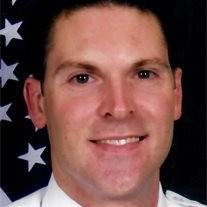 FLA. - Kirk MacFarland Keithley, a Hillsborough County, Florida Deputy Sheriff and resident of Land O Lakes, Florida died at his home on Monday, September 24, 2018 at the age of 39. Kirk is survived by his children. A son, step son and two daughters residing in Land O Lakes, Fla. He is also survived by his mother Shirley (George) Cusack of Brimfield, Illinois, brother, Kevin (Raquel) Keithley of Chicago, Illinois; sister, Gayle Keithley of Dunlap, Illinois; nephews, Drake Rundall and Jase Keithley; and niece, Kristin Keithley. Kirk is predeceased by his father, Stanley Keithley and wife Samantha Keithley. Kirk was born July 12, 1979 in Peoria to Stanley and Shirley (Symonds) Keithley. Kirk graduated from Illinois Valley Central High School in 1997 and attended East Tennessee State University (ETSU) in Johnson City, Tennessee. Kirk played baseball at ETSU and graduated with a degree in Criminal Justice in 2002. Kirk was a Police Officer for the City of Saint Petersburg, Florida from 2003 - 2009. He joined the Hillsborough County Sheriff's Office as a Deputy Sheriff in 2009. Kirk and Samantha Price were married in 2012. Kirk was a great dad and loved his four children. He was a sports fan of the Tampa Bay and Chicago sports teams. Kirk also was an avid Pearl Jam fan and enjoyed going to concerts. He will be missed by his family, friends, and co-workers. Cremation Rites have been accorded. A memorial service will be held Tuesday October 2, 2018 at 11:00 am at Cumerford-Hurd Funeral Home in Peoria. Prior to the service, visitation will be held from 9-11 am. Burial will be at the Mt. Hawley Cemetery in Peoria, Illinois. In lieu of flowers, donations may be made to a memorial account for the Benefit of Kirk's Children at CEFCU 8629 N. Knoxville Ave., Peoria, IL 61615. Cumerford-Hurd Funeral Home in Peoria is handling arrangements. Online condolences may be made to the family at www.cumerford.com

To send flowers to the family or plant a tree in memory of Kirk Keithley, please visit our floral store.

To send flowers to the family in memory of Kirk Keithley, please visit our flower store.