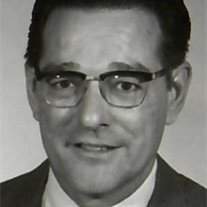 Keith A. Turner, age 92, of Chillicothe, passed away on Wednesday, January 16, 2019 at St. Joseph Nursing Home in Lacon. Keith was born on February 12, 1926 in Cornell, IL to Irwin and Lola (Hayes) Turner.  He married LaVon Meils on February 8, 1946. Surviving are his three sons, Michael A (Rosalie) Turner DVM, Kevin L. (Ma Lan) Turner, and Scott I. (Gisela) Turner, all of Chillicothe; four grandchildren, Kalee (Nate) Westerfield, Ashley (Brant) Miller, Stephen (Jami) Turner, and Dustin (Heather) Kapp; and seven great-grandchildren.  He was preceded in death by his parents; one daughter, Martha A. Turner; one grandchild, April Turner; and two brothers, Kenneth and Phillip. Keith was owner of Western Yeast Company from 1966 to 2015.  He was also in the insurance business for many years and was the founding owner of Turner-Hicks Insurance Company in Chillicothe. Services will be held on Wednesday, January 23, 2019 at 11am at Weber-Hurd Funeral Home in Chillicothe.  Visitation will be held one hour prior to the service at the funeral home.  Interment will be at Chillicothe City Cemetery.  Memorial may be made to the Community Needs Agency in Chillicothe.

To send flowers to the family or plant a tree in memory of Keith A. Turner, please visit our floral store.

To send flowers to the family in memory of Keith Turner, please visit our flower store.