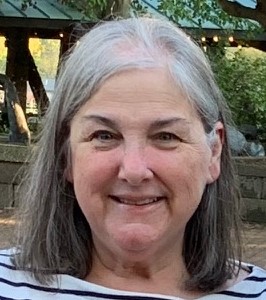 Kathy was born in Kewanee, Illinois, on March 18, 1960, to Warren and Janet (Swain) Arter.  She married David L. (Dave) Hoffman in Galva on December 29, 1984.  They spent the past seven years in retirement and had never been happier.  He survives.

Also surviving are two sons and one daughter: Timothy A. (Tim) Hoffman, an Investment Banker, living in Boston, MA., Zachary H. (Zack) Hoffman, a Masters student, living in Cambridge, MA., and Sophia A. (Sophie) Hoffman, a Law student, living in Santa Clara, CA.  She is also survived by two brothers and one sister: John (Liz) Arter of Donahue, IA., Hays (Jen) Arter of Town & Country, MO., and Holly (Bill) Angus of Peoria, IL.  She was preceded in death by her parents, Dave’s parents, her sister Sue Cochran, and her sister-in-law Karen Domnick.

Kathy grew up in Galva, Illinois, and graduated from Galva High School in 1978.  She was on the cheerleading squad all four years and was captain as a senior.  She also graduated in the top ten of her class.  After graduation, she attended the University of Missouri – Columbia for two years where she studied Journalism and earned a sports letter in Water Ballet.  She left school in 1980 to join an international touring cast of Up With People.  She traveled for three years, first as a cast member, then as a Promotion representative, and finally as a Promotion Manager.  When she left the road, she returned to Peoria and continued her studies at Illinois State University where she ultimately earned a BA in Elementary Education.  She got married in 1984 and moved to Madison, WI. where she earned a BA in Journalism from the University of Wisconsin – Madison.  She loved to travel and over the years lived with her family in Geneva, Switzerland; Dubai, U.A.E.; and Frankfurt, Germany.

The most important part of Kathy’s life was her Christian faith and her family.  She was a devoted wife for 37 years and left the workforce to raise her three children.  She was a very strong Christian and lived her faith with everyone she encountered.  She was kind and compassionate, always thinking of others rather than herself.  She was an exceptional listener and always interested in what her friends were doing and the world around her.  She was an avid reader and writer, and loved to garden.  She was authoring a children’s book for each of her kids and recently completed the one entitled “Sophie’s Very Boring Day”.

Kathy wanted all of her relatives, friends, and acquaintances to know the love and peace of her Lord and Savior Jesus Christ.  She is now with Him in Heaven.

In lieu of flowers, memorials may be made to Redeemer Lutheran Church.  Online condolences may be sent to the funeral home at www.weberhurdfuneralhome.com  or directly to the family at kathyarterhoffman@gmail.com.

To send flowers to the family or plant a tree in memory of Kathryn A. Hoffman, please visit our floral store.

To send flowers to the family in memory of Kathryn Hoffman, please visit our flower store.