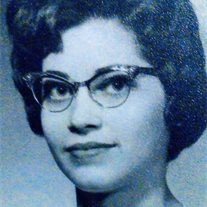 Judith A. White, age 76, of Mesa, Arizona, passed away on Friday, February 1, 2019 at Canyon Winds Assisted Living. She was born on March 11, 1942 in Peoria, IL to Glenn D. and Mary E. (McLaughlin) Koch.  She married Dr. Fred Z. White on July 13, 1990 in Peoria.  He preceded her in death. Surviving are her two sisters, Janet (Ronald) Foster of Chillicothe and Barbara (Robert) Martin of Fort Myers, FL; two nieces and one nephew; and two grandnieces and three grandnephews.  Also surviving are Fred's children: Dr. Janet (Jim) Schnitz, Don (Patricia) White, Kristen (Randall) Evans and Tim White; 11 grandchildren and 10 great-grandchildren. While in high school, Judy worked at the old Chillicothe Township Library.  As an avid reader, this gave her the opportunity to enjoy exploring a vast array of subjects.  As a page reader, Judy could finish up three books a day.  She accomplished her dream of becoming a nurse when she graduated in 1963 from Methodist Hospital School of Nursing and she was employed for several years by Drs. Green and White in Chillicothe. During her employment there she continued to learn and became of the first nurse practitioners in the country.  She then went on to contribute to the field of advanced practice nursing by helping to develop the program that would become part of the curriculum for nurse practitioners at the University of Illinois.  Judy later worked as the nurse practitioner for the Occupational Health Department at Methodist Medical Center, retiring in 1990. After retiring, Judy and Fred made their home in Mesa, Arizona for several years and they stayed involved with continuing education in the family practice medicine.  They were also able to travel to many beautiful places including Alaska and Ireland. In Fred's final years, Judy became his primary caregiver.  After his passing, she remained in Mesa and continued her lifelong love of reading several books a week.  She also enjoyed quilting and making embroidered gifts for her family and friends. Cremation rites were accorded and a private graveside service will be held at a later date.

To send flowers to the family or plant a tree in memory of Judith A. White, please visit our floral store.

To send flowers to the family in memory of Judith White, please visit our flower store.